The Town with a hidden past...

Although you wouldn't know it from observing the quiet town today, Lockeport was, at one time, a bustling cosmopolitan trade hub, with a number of trading companies sending ships laden with salt cod and lumber to the West Indies to exchange for commodities such as salt, and molasses which were in great demand throughout the Maritimes. (At the time, Lockeport was far to puritanical to trade in rum...)

The Town  continued to fulfill its initial purpose.  Evidence of the success of the fishing industry can be found all along our harbor front, from the number of buildings, to the grandeur of the homes. During the 1800's Lockeport was among the 10 busiest ports in Canada, bringing back an immense bounty from the sea!

The town boasted more than 8 fishplants, along with a revolutionary Lobster Cannery, that was the first to remove the lead from its cans (the patent holder for the process was the first mayor of Lockeport).

At its peak the town's population was estimated conservatively at 2000 people, not counting the transients working in the shipyards or any of the hundreds of tourists that journeyed to Lockeport to take in it's fine beaches.

During the 1900's Lockeport became a port of call for the coastal steamers of the Thompson Steam Ship Company, with ships leaving Lockeport Daily for Halifax, St. John and upstate New York.

Naturally the town had all the necessary amenities to support a population of fisherman, as well as the more well to do plant owners. There were a number of grocery stores, shoe stores, and clothing stores. Lockeport even had its own foundry.

It was also home to famous restaurants, including the Ragged Islands Inn, which was a favorite haunt of Elizabeth Bishop.

The train station in Allendale shortly after it was built

The town ferry, the D.D. Mann was built in 1922 to link the Town of Lockeport to the train station in Allendale.

Boats returning to the Lockeport Company (fish plant) Wharf with a fresh catch of herring aboard. 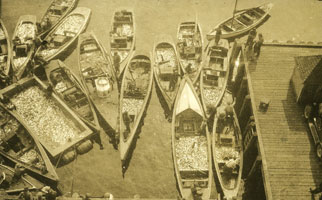 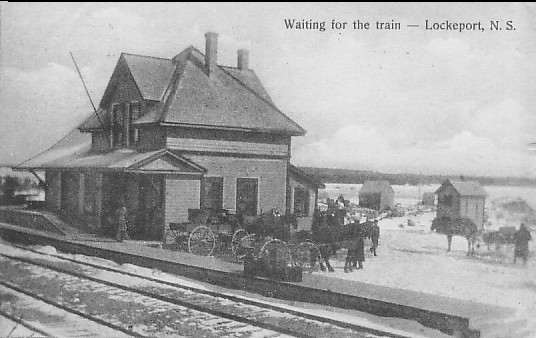